For our 40th Anniversary, CADArts  organised an exhibition titled 4U2 TOUCH – Tactile Arts & Crafts, in the gallery at the Red House Museum during  May  2018. The exhibition was aimed at the visually impaired but enjoyable by all who came to view. We have staged 2 successful events in the past which were both visually stunning.

This is an exhibition in a Museum where the public are asked to touch the exhibits. Some members may remember the  previous, Tactile Textiles in The Red House Museum, which was run for the same purpose? also a further one held at Highcliffe Castle, which displayed other forms. They were both so much enjoyed by our blind and partially sighted visitors that we felt that we would like celebrate our 40th  with another similar event.

We had an amazing selection of entries and the exhibition looked wonderful. Opening was on  Saturday 28th April by the Mayor of Christchurch. Visitors welcomed.

At the recent CADarts “4 U 2 Touch, Tactile Art Exhibition” at the Red House Museum in Christchurch, a relief tile panel was exhibited by artist Keith Rogers. The tiles were cast in Plaster of Paris from a mould made out of clay and rooms in Highcliffe Castle not yet restored influenced the designs.

After exploring the tile relief panel at the Red House, a visiting member of the Bournemouth Blind Society showed interest in the possibility of trying to make tiles themselves. Keith happened to be in the museum at the time and was very interested in the idea and to see if a workshop could be arranged. The Blind Society was contacted and they offered to arrange the workshop and scheduled the time and facilities. Subsequently on Monday 20th August six participants eagerly took part in the workshop that turned out to be a wonderful experience for all.

The group consisted of two who had become totally blind, and those with varying degrees of visually impairment. Some had been artistic and some never. For the topic of the workshop Keith used the theme of his new exhibition that is about transitions and the pause between moments in time. He used the example of a busy mind through to becoming calm and talked about working in an abstract way to reflect their emotions. They were asked to create two tiles one reflecting the chaotic mind and the other a mind at peace. The group immediately identified with the topic and was excited to give it a try.

Each participant was given a wooden frame in which lay a soft tile of clay. This was accompanied by a selection of everyday objects that could be used to make marks in the clay. After experimenting a little they just dove straight in using an array of tools. After a short period of time they created “mini masterpieces.” The first tiles were immediately cast in Plaster of Paris and were available for the group to explore after lunch. They were very excited and pleased with what they had created.

For the second tile, a discussion of ideas that could represent calm and peace in abstract terms proved to be a little more difficult, so they were encouraged to use simple and fewer images with lots of space. Some thought of stars and the sun and curved lines and some chose an image they liked from the first tile and used it in isolation. A Plaster of Paris cast of this second tile was made later to give each participant two finished tiles that can now be juxtaposed. The overall result is outstanding.

Exploring abstract tactile experiences was very positive and exciting for all of the participants and there are plans to do more workshops in the New Year. Keith says that working with the group was a fabulous experience and that they had created very beautiful tiles. He was amazed at what they had achieved. Keith has offered to exhibit the work as part of his new exhibition “From Here to There – And In Between” at the Forest Arts Centre which runs from November 15 through to the New Year.

For making this workshop possible we would like to thank CADArts, Bournemouth Blind Society and for the cost of materials, Rotary Club of Bournemouth East Cliff. 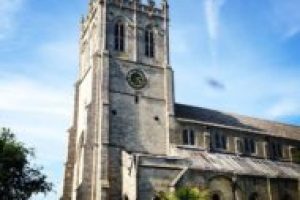 Flow Painting, Beadwork, Textureral pictures are all on display at[...]