This was an exhibition inviting the viewer to touch the exhibits. Aimed at the visually impaired who are invited to explore the works by touch with the addition of braille signs.
We have staged an exhibition like this before which was visually stunning as well as being rewarding to those with a visual impairment. It is quite humbling to see the enjoyment given to those who learn about something purely by touch.
The works were displayed in the Gallery and the Gardens of the Red House Museum Gallery, with the aid of braille signs

On a chilly wet Saturday morning, walking into the gallery at the Red House, my first impression was a feast of colour.

When we were children we used to screw our eyes tight and stumble around to imagine what it felt like to be blind, though on a sunny day the sunlight still penetrated our eyelids. After decades of listening to Peter White on the BBC Radio Four programme, In Touch, I know that being visually impaired does not always mean total darkness. Degrees of light, shadows, perhaps colours; those of us who have always been fully sighted can never know what it is like to have little or no vision, but bright colours will perhaps add to the experience of art for some visually impaired.

But this exhibition was about touch and in a world of flat screens and photography, art with texture and dimension is appreciated all the more and we didn’t need to resist the urge to touch. There were sculptures, the barbed wire wasn’t real. Pictures were felted, padded, embroidered, multi media and moulded. Who wouldn’t want to clutch the comforting knitted handbags on a cold day.

Outside, the rain had stopped, but the sky was still grey. I was drawn to the only driftwood picture, propped on a wooden bench. In a garden full of dinosaurs there was the reassuring presence of a Labrador, though he was made of chicken wire.

Back inside, the gallery was full as the exhibition was officially opened. It would be interesting to hear the feedback from visually impaired visitors.

Artists exhibit their and demonstrate their skills throughout the week[...] 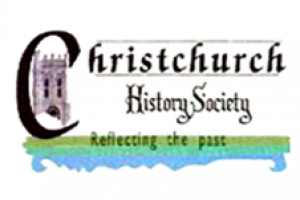 Christchurch History Society Our Society is dedicated to the study[...]