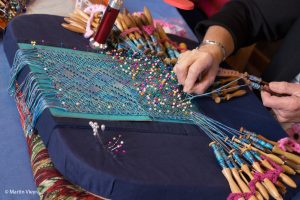 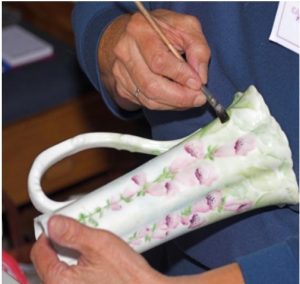 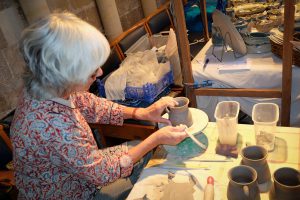 Artists exhibit their and demonstrate their skills throughout the week of this exhib ition in the Priory Church.
CADArts presents this event on alternate years, the next one will be held in June 2021.
These exhib itiuons have been held since 1990 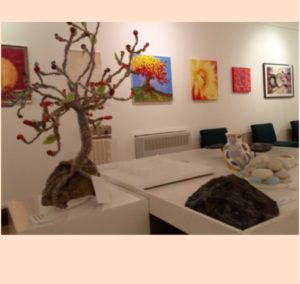 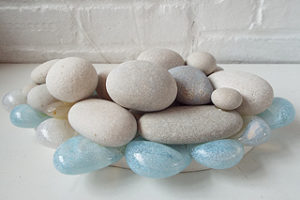 This was an exhibition inviting the viewer to touch the exhibits. Aimed at the visually impaired who are invited to explore the works by touch with the addition of braille signs.
We have staged an exhibition like this before which was visually stunning as well as being rewarding to those with a visual impairment. It is quite humbling to see the enjoyment given to those who learn about something purely by touch.
The works were displayed in the Gallery and the Gardens of the Red House Museum Gallery, with the aid of braille signs 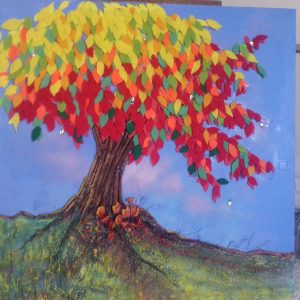 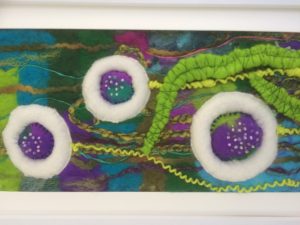 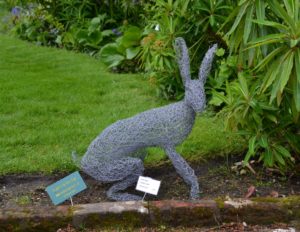 On a chilly wet Saturday morning, walking into the gallery at the Red House, my first impression was a feast of colour.

When we were children we used to screw our eyes tight and stumble around to imagine what it felt like to be blind, though on a sunny day the sunlight still

penetrated our eyelids. After decades of listening to Peter White on the BBC Radio Four programme, In Touch, I know that being visually impaired does not

always mean total darkness. Degrees of light, shadows, perhaps colours; those of us who have always been fully sighted can never know what it is like to have

little or no vision, but bright colours will perhaps add to the experience of

art for some visually impaired.

But this exhibition was about touch and in a world of flat screens and photography, art with texture and dimension is appreciated all the more and we

didn’t need to resist the urge to touch. There were sculptures, the barbed wire wasn’t real. Pictures were felted, padded, embroidered, multi media and

moulded. Who wouldn’t want to clutch the comforting knitted handbags on a cold day.

Outside, the rain had stopped, but the sky was still grey. I was drawn to the only driftwood picture, propped on a wooden bench. In a garden full of dinosaurs there was the reassuring presence of a Labrador, though he was made of chicken wire.

Back inside, the gallery was full as the exhibition was officially opened. It would be interesting to hear the feedback from visually impaired visitors. 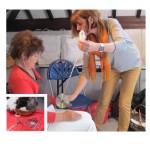 Christchurch Culture and Learning Arena (C.A.L), whose activities focus on the heritage of the Ancient Borough of Christchurch, are celebrated the receipt of a grant of £7,388 from the Heritage Lottery Fund (HLF).

The money went towards the commemoration celebrations in Christchurch of the 800th anniversary of the signing of the Magna Carta on Monday 15 June. King John was a frequent visitor to Christchurch Priory and the celebrations will include a re-enactment of his final visit.one of his visits.

The Mayor’s Parlour in the High Street and Saxon Square were the main centre of activities. A display of vestments and regalia were held in the Mayor’s Parlour while a Heritage Marquee in Saxon Square housed the Magna Carta Census Scrolls which visitors were encouraged to sign as a reaffirmation of the benefits of the Charter.

Christchurch History Society were on hand to provide information and a Heritage Trail was led by historian Michael Andrews around the ancient Plantagenet boundary. Pupils from Christchurch Junior School dressed in colourful medieval costume and Bournemouth Shakespeare Players portrayed the arrival of King John and his courtiers to deliver a charter for ceremonial signing in Christchurch Priory (courtesy of the Reverend Canon Charles Stewart). A peal of bells herald King John’s departure towards the Constables House to deliver the Charter.

King John’s itinerary include the Constable’s House, where he stayed in 1215 and a stone-mounted plaque financed by the Heritage Lottery Fund grant was unveiled to commemorate his visits,. After banqueting and entertainment on the Bowling Green area, courtesy of the Kings Arms Hotel, the Plantagenet Crier will led the Royal entourage to the Saxon Cross and the Mayor’s Parlour balcony before departure.

In the week prior to the event the Hayloft Gallery in Wick Lane offered free workshops in the ancient crafts of calligraphy, spinning and weaving, medieval bag making and the Bayeux tapestry stitch and preparations began for Christchurch’

Throughout the week beginning 15 June Christchurch Priory hosedt an art exhibition by its four local schools entitled ‘800 years of cultural heritage’ and also hold a number of musical events, including a Choral Evensong and an organ recital.

In addition to the HLF grant, which contributed to specifically designated fund of the activities in the event, Christchurch Council provided £500 of funding.

Glimpses Inside the Hayloft 2006