One of the largest and most successful art clubs in the area is being revitalised.

With an almost entirely new committee, under the leadership of Chairman Mike Daniels the Fellowship is aiming to blend the experience of the last 56 years with new ideas.

The format of monthly demonstrations will continue in the afternoon of the first Wednesday of each month in the excellent hall at the Methodist Church in Lymington Road, Highcliffe between 14.30 and 16.30 hrs. Demonstrators in 2019 include regular artists such as Alan Langford and Lindsey Cole as well as newcomers such as Dee Cowell and Charlie Evans. Dates may be found in the Fellowship advertisement.

The annual exhibition runs for 3 weeks from 31st July to 19th August and is also held in the Methodist Church Hall in Highcliffe. It is for many the highlight of the art year. Fully paid up members can exhibit their work to fellow members and the general public with many people planning their visit to the area to fit with the dates that the exhibition is on. The planning and preparation for the exhibition starts in March and is led by Richard Adams, Exhibition Co-ordinator, who is supported by a substantial team of volunteers.

In order to better meet the needs of members and provide up to date information about the Fellowship the Web site is undergoing a major revamp lead by our newly appointed Web Coordinator Ian Game. The new Web site address is www.Highcliffe-art.info.

To encourage young people to become interested in art the Fellowship also runs an annual  competition with a local school to select and recognise a ‘Young Artist of the year’ with the award being presented to the winner at the opening of the annual exhibition.

Historical Background: In the late 1950s the owner of the local Highcliffe art shop was Fred Norbury, an artist and tutor.  He realised that many local people were painting and that the pictures brought to him for framing were of a good standard.

With encouragement from Councillor Irene Stevenson, he persuaded the painters to stage an exhibition in what was the sunken rose garden on the nearby cliff tops.  This was repeated until the council ploughed up the area.

Other exhibitions followed in various locations and, in 1962, a club was formed.  In appreciation of her help, Councillor Irene Stevenson was created president; a position held until her death in 1994.

From these small beginnings, the Fellowship developed and found permanent homes for the monthly meetings in Greystones’ Hall; and for the annual one-week exhibition in the Highcliffe Methodist Hall.

The fellowship flourished to such an extent that it had to be limited to 150 members and there is now usually a waiting list for new members.  A book is held by the stewards at the exhibitions for the names and details of people wishing to be added to the membership waiting list.

In 1996, the now regular monthly meetings were also moved to the Methodist Hall.  The annual exhibition has now expanded to 3 weeks and, typically, hangs about 250 pictures with a further 100 unframed, together with numerous greetings cards.  A policy of free admission to the exhibitions has always been maintained with a souvenir catalogue available for a small fee if required.  When visitors are seeking pictures by a particular artist, the stewards have an alphabetical listing in their master catalogue.

Meetings are held on the first Wednesday of each month (except August) from 2.30 – 4.30 pm, when a professional artist demonstrates some topic or techniques to the members or perhaps gives a critique of members’ pictures.  A radio microphone is used to ensure that everyone can hear and the hall has a loop system fitted to assist those with hearing aids.  There is also a large-screen TV coupled to a video camera so that presentations can be enhanced with close-ups and zoom-ins, as appropriate.

A library comprising about 70 videos and DVDs, together with numerous books, is available for members to borrow.

The former Chairman, Dennis Ford, awarded the Young Artist of the Year Award to a student of fine arts at Highcliffe School.

On a recent visit to see her extended family in Cape Town, 15 year old Danielle Esterhuizen filmed from the car the vast extent of the informal settlement of Khayelitsha.  This inspired the triptych she presented for her GCSE exam this summer.  It presents a great sense of space and beauty albeit with the juxtaposition of the settlement with the city of Cape Town.

The President, Josephine Spencer MBE, also awards a prize each year for a picture which she would like to hang on her wall.  This year it was awarded to Ann Bill for her charming watercolour Eggs in a Basket.  Ann, who loves painting in watercolours, said that she was surprised, excited and honoured.

The exhibition was opened by Ben Jenkins on behalf of our sponsor Mitchells Estate Agent.

The exhibition of over 250 pictures in a wide variety of styles and media is open at the Methodist Church Hall, Lymington Road, Highcliffe until Monday 20th August, closed Sundays. 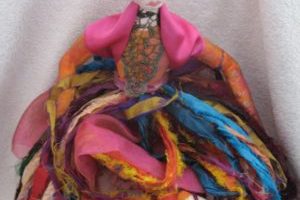 For our 40th Anniversary, CADArts  organised an exhibition titled 4U2[...] 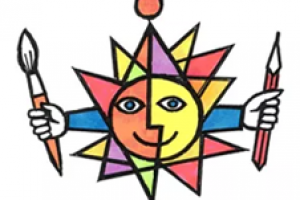 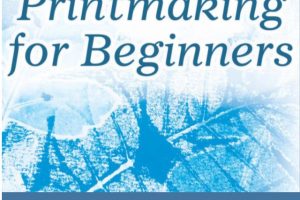